Delta-8 in Your State: Regulations & Trends

Written by The Brightfield Team

Due to the growing popularity of hemp-derived cannabinoids, Delta-8 THC remains a subject of much debate. As consumer awareness of Delta-8 and other compounds (Delta-9, HHC etc.) grow so do questions about their safety and legality. In recent months the federal government and national regulators have begun stepping in to set restrictions around the compounds. The US has a patchwork of state laws regarding Delta-8. Several states have banned or restricted it, creating controversy among cannabis producers.

So, why are some U.S. states banning Delta-8 THC? Which ones have already banned it? What is the role of the federal government in the future of Delta-8? And how does all of this affect the cannabis industry?

We'll take a look at the Delta-8 market including state by state restrictions and regulations, as well as larger market trends.

Delta-8 has a complicated history in the United States. In 1937, the Cannabis Tax Act ushered in a blanket ban on cannabis and all its related products. By the 1970s up to 11 states had decriminalized cannabis but this liberalization was quickly ground to a halt as the war on drugs led to the enactment of several mandatory punishments for all cannabis-related goods.

In 2018, the US Farm Bill made the distinction between full-blown THC (the kind that gets you high) and other cannabinoids. Substances with less than 0.3% THC were classified as hemp and as such were no longer criminalized. This murky legality has led to a massive boom in the hemp derived cannabinoid industry with hundreds of CBD brands pivoting to Delta-8 production. Millions of Americans have incorporated Delta-8 into their daily routines, but the federal government's stance on its legality is still unclear.

As of right now, there are no Delta-8 specific laws at the federal level. The 2018 Farm Bill, which classifies all cannabis products with less than 0.3% THC content as hemp has been largely accepted as an indirect nod towards the legality of Delta-8. With more companies offering psychoactive hemp-derived cannabinoids for recreational use across the country, concerns have been rising about its safety for consumers, especially vulnerable segments like children and pregnant people.

Recent federal judgements may lead to a tighter, more restricted market for Delta-8 producers. On November 9th, a federal judge ruled in favor of the Kansas state governor, stating that “the 2018 Farm Act, which legalized hemp, doesn’t make selling hemp-derived products such as Delta-8 THC legal.”

Even more recently (November 16th), the FDA issued five new warning letters to companies that make edible products containing Delta-8. The companies are required to address the FDA to bring their products into compliance with the Food, Drug, and Cosmetic Act (FDCA) or face enforcement actions.

The FDA has also shared consumer advisories warning consumers against the continuous use of Delta-8 due to the lack of research about the long-term effects of hemp-derived cannabinoids. These ongoing restrictions make it difficult to fully understand the federal legality of Delta-8.

With federal legality still unclear, producers and consumers alike must review Delta-8 laws on a state-by-state basis. Although, there are currently 21 states where Delta-8 is banned or restricted – rapidly evolving industry regulations may lead to unforeseen changes in this list.

States Where Delta-8 is Banned or Restricted

Despite the heated public debate, it is currently legal to produce and sell Delta-8 in most US states. Let's take a look at the situation in each state where Delta-8 is legal. 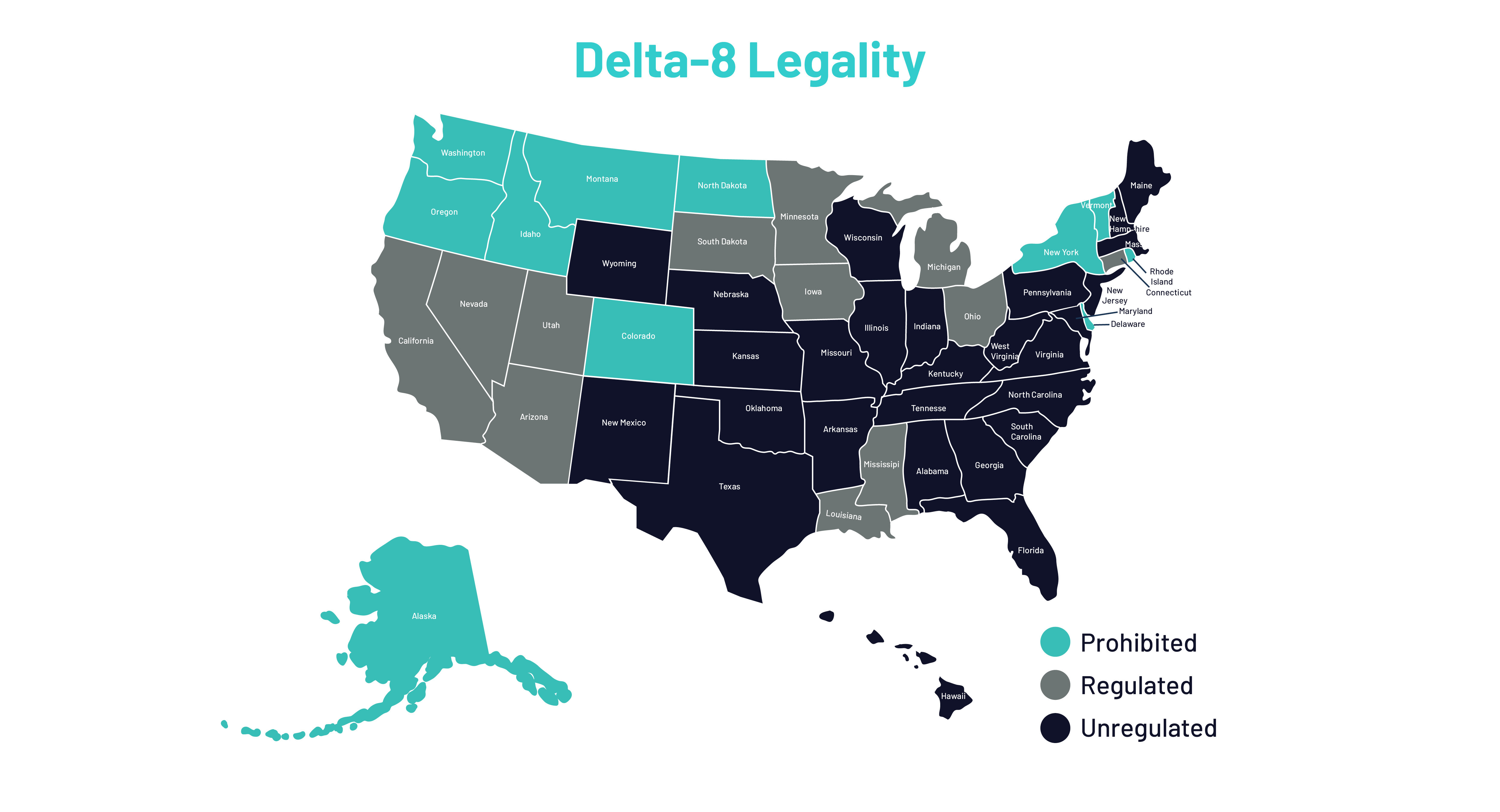 Senate Bill 225 legalized Delta-8 and Delta-10 in the state of Alabama. This means that the possession, distribution, and sale of hemp and its derived products were no longer illegal. There have been a few attempts to re-criminalize Delta-8 and other cannabinoids, notably, a February 2022 attempt by Senator Tim Melson which ultimately failed. As of right now, Delta-8 appears to be safe from any illegalization moves.

Although Delta-8 is not completely illegal in the state of Nevada, its sale and distribution are only allowed under a tight regulatory framework.  The state's Cannabis Compliance Board (CCB) oversees licensing of companies that are allowed to produce and sell Delta-8-infused products. A March 2022 bill seeks to restore a blanket ban on Delta-8 but has not yet been signed into law.

Delta-8 is in a legal grey area in Arkansas. Although state law lists it alongside Delta-10 and HHC as controlled substances, the state’s health department has neither declared it banned nor legal, leaving local authorities with the discretion to act as they please.

Georgia has almost an identical stance on Delta-8 as Florida above. All hemp-derived Delta-8 is completely legal while cannabis-derived Delta-8 remains strictly illegal with legal incarceration and fine punishments prescribed.

Delta-8 is widely and readily available across the state of Hawaii although it continues to have a questionable legal status. The state government in 2019 stated that interstate sales and distribution of all cannabis-related substances are contrary to FDA rules and thus illegal.

The Industrial Hemp Act made the production, sale, distribution, and purchase of hemp-derived Delta-8 fully legal in Illinois. It is also one of the few states where controlled personal possession of cannabis and cannabis-derived Delta-8 is also legal.

Delta-8 survived a recent legal scare in Indiana where some lawmakers attempted to draft a blanket ban on it but were ultimately unsuccessful. This only concerns hemp-derived Delta-8 as its cannabis-derived counterpart remains strictly illegal.

Here, Delta-8 remains tentatively legal. Although the state’s attorney general released a personal opinion piece where he categorized a wide section of Delta-8 products as illegal, since the A.G’s opinion is not legally binding, Delta-8 products remain available for sale. The recent judgement by a federal judge in favor of the Kansas state Attorney General may lead to more concrete legalization specifically banning Delta-8 and other hemp-derived cannabinoids.

This is one of the more active legal battlegrounds for Delta-8. A 2021 memo by the state’s Department of Agriculture declared all Delta-8 products illegal. This action led to raids and mass seizures of Delta-8 products which were halted by an emergency injunction. As of right now, this injunction continues to temporarily legalize Delta-8.

Legislative Document 1159 makes the sale, possession, and distribution of hemp-derived Delta-8 fully legal in the state of Maine.

Massachusetts legislation coincides with federal law which does not ban Delta-8 derived from hemp. However, the state does explicitly ban the production of synthetically derived Delta-8.

While the state government maintains that synthetically derived Delta-8 is illegal, it does not address the legality of possessing it.

House Bill 1547 made hemp and its derived compounds legal in consonance with federal legislation. Although cannabis and cannabis-derived Delta-8 remain illegal.

Nebraska’s Hemp Farming Act (Legal Bill 657) made hemp-derived Delta-8 completely legal in the state. It was later amended to align with the federal government’s Farm Bill.

Delta-8 is legalized in New Carolina by Senate Bill 352, but only the hemp derivative. Cannabis-derived Delta-8 remains illegal.

Hemp-derived Delta-8 is legal, while its cannabis variant remains illegal.

Distribution, sale, and possession of hemp-derived Delta-8 is legal in Oklahoma.

Hemp-derived Delta-8 remains temporarily legal in Texas thanks to a court injunction as the substance continues to be the subject of endless battles between CBD vendors and state officials.

Both hemp-derived and cannabis-derived Delta-8 are legal in Virginia with no legal repercussions on possession, distribution, or sale.

While the market for Delta-8 vapes and gummies are by far the largest at $1bn and $630m respectively, the fastest growing product types mimic the traditional CBD market in the products consumers prefer. According to data from Brightfield Group’s market sizing insights, Delta-8 topicals and beauty products are experiencing rapid growth with a year-over-year growth rate exceeding 160%. Delta-8 drinks are also seeing rapid market expansion with a growth rate of 152%.

How are consumer trends changing?

Delta-8 users skew lower income and male which is important to note during the current economic downturn. They also tend to use prefer cannabis over alcohol.

As regulations become clearer, the already thriving industry is expected to grow even larger. The growing popularity of synthetic cannabinoids is a sign that the public is looking for safer alternatives to illegal marijuana. The industry and its consumers want legal, high-quality products with no risk of prosecution. There is a large market for synthetic cannabinoids, and it’s likely that the industry will continue to grow as consumers look for new and improved products. The best way to ensure that your business remains competitive is to partner with a strong data provider that can help you stay on top of developing trends.

If you enjoyed this Delta-8 deep dive, sign up for Brightfield Group’s newsletter for more high-quality Delta-8 content.