Wake and Bake or Late Night Toke: How does America Roll?

People have long debated whether the morning or evening is a better time for exercise, work, and play. Now, in the wake of broader legalization and use, we can add cannabis to that list too.

So far, two distinct camps have emerged: “Wake and Bakers” and “Late Night Tokers.” While both cannabis consumer groups share some traits, they have some key differences, particularly age, use, and identity.

First some toplines: In Brightfield’s 2020 analysis of frequent cannabis users (>1x/day), 51% of users reported use “right before bed” compared to 42% “just after waking up.” In aggregate, the two groups indicated similar preferences for “desired product effects” (relaxation, sleep, etc) and “product attributes” (price, taste, etc). However, the idiosyncrasies of the two groups becomes more apparent through Brightfield’s cannabis personas. 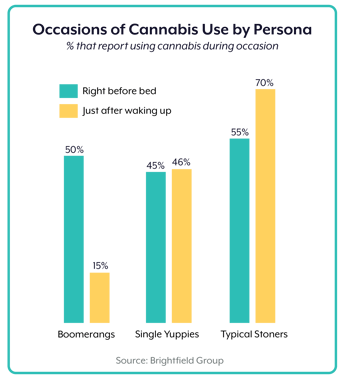 A clear generational divide exists between those who “wake and bake” and those who use before bed. Among “Boomerangs”—one of the older personas—a majority reported using before bed compared to just 15% in the morning. In contrast, Typical Stoners and Single Yuppies, two younger personas, more often use cannabis in the morning (70%, 46%, respectively) than the evening (55% and 45%).

The Nexus of Needs and Wants

In other words, the cannabis wants of a Wake and Baker are broader, and their needs are felt more acutely.

The possibility of Wake and Bakers having a more robust cannabis palette is corroborated by the morning use rate of the least experienced cannabis users. Only about a quarter of “Newbies” wake and bake compared to over half who use before bed. This trend would suggest Wake and Bakers are more attuned with their cannabis needs than night time users.

Hours of cannabis use also seem to be connected to one’s class, politics, and Identity. More affluent groups, like Liberal Elites and Single Yuppies, have higher AM use than less affluent groups like Boomerangs. The same goes for diversity, with less homogeneous personas using more in the morning.

Finally, there’s a gender dimension: Women are more likely to use Cannabis in the morning than men. For example, Baked Brownie Moms and Divorced Dad’s share similar generational and socio-economic characteristics, but wildly different morning use rates. Whereas use for Moms is about the same, Divorced Dads are almost two times more likely to use at night than in the morning.

So where does that leave us?

Wake and Bakers and Late Night Tokers are indeed discrete groups. But do these categories pose lasting trends for the market? And what opportunities, if any, are there for companies to exploit? Given what we know now, one can certainly foresee an increase in morning use.

Because “Wake and Baking” is the choice of a younger, more diverse generation, mornings could become the primary time for cannabis use as older, less diverse personas become a narrower segment of the market. Likewise, if morning use indicates a broader, more refined cannabis palette, wider use from legalization (and during the quarantine) could also increase the number of Wake and Bakers and occasions in which brands can insert their presence. And that’s not to mention the mental health conditions (spurred by Coroanvirus) that will need to be treated at all hours of the day.

Wake and Baking still faces some headwinds, though. As the economy sputters, less disposable income could reduce the number of Wake and Bakers. The question now becomes how companies target - and market to - these distinct segments of the population.